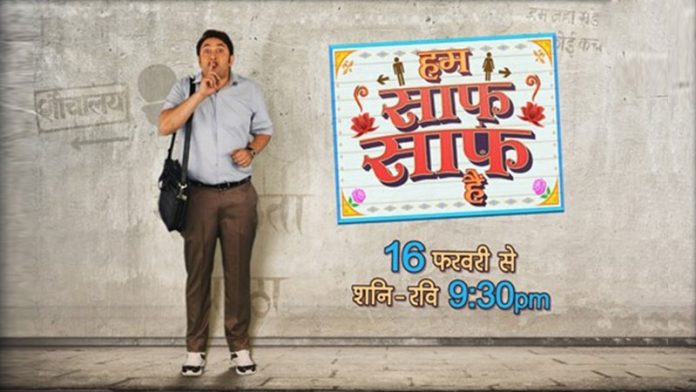 Emphasizing on the importance of sanitation and hygiene in the country, leading Hindi mass entertainment channel Rishtey is soon to launch a new finite series called ‘Hum Saaf Saaf Hain’

The 14-episode finite series, ‘Hum Saaf Saaf Hain’ is a social comedy that trails the journey of an undercover government official who goes from village to village checking up on the implementation of the Swachh Bharat Abhiyaan. The show will air on Rishtey starting 16h February 2019, every Saturday and Sunday at 9:30 PM.

Commenting on the initiative, Shri. Parameswaran Iyer, Secretary-Ministry of Drinking Water & Sanitation said, “Under the inspirational leadership of the Hon’ble Prime Minister, the Swachh Bharat Mission (Grameen) has become a people’s movement, revolutionizing sanitation in rural India. We are poised at the brink of achieving an ODF India, with 5.5 lakh villages and 600 districts already declared free from open defecation. The need of the future is to sustain these outcomes through continuous efforts made to reinforce the messages of safe sanitation and cleanliness. I am very happy that Viacom 18 Media Pvt. Limited and HDFC Limited are supporting the Swachh Bharat Mission and have produced “Hum Saaf Saaf Hain” – an entertainment-packed show for the full family, that carries the message of sustained sanitation in families and communities. My congratulations to the entire team.”

The show promises to be a family entertainer which will not just tickle their funny bones but also enlighten them on the importance of sanitation and hygiene. The show will highlight issues such as ‘Swacchagris’, Toilets for the differently-abled, women’s safety and hygiene, ODF Plus and more with the twist of humour to engage the audiences.

Mr. Deepak Parekh, Chairman, HDFC said, “The Swachh Bharat Mission launched by the Government of India in 2014, was a much-needed initiative to make India open defecation free over a 5-year time frame. As a flagship and successful programme of the present Government, the Swachh Bharat Mission has not just built sanitation infrastructure, but also focused on creating awareness and behavioral change amongst people. Recognising the strong inter-linkage of sanitation & hygiene with socio-economic factors such as healthcare, sustainable communities and gender dignity, Sanitation has been one of HDFC’s focus areas since 2014 for its CSR programmes. We have partnered with experienced organisations across India, which are deeply connected with the communities they work in. HDFC is happy to partner with Swachh Bharat Mission – Grameen and Viacom 18 Media Pvt. Limited for an innovative television series, which uses entertainment as an educative medium to impress the importance of good sanitation practices amongst India’s rural population. I wish all the teams success for this venture.”

Speaking about the importance of socially inclined content, Sudhanshu Vats, Group CEO & MD, Viacom18 said: “India is at the precipice of becoming open defecation free and at Viacom18, we believe that the media & entertainment industry plays a crucial role in changing behaviour and mindsets towards safe usage of toilets. Hence, be it through films such as Toilet Ek Prem Katha, shows such as Navrangi Re! and even with our flagship CSR program Chakachak Mumbai, we have mainstreamed the conversation on sanitation in living rooms and film theatres. With Hum Saaf Saaf Hai, we further intend to engage viewers in entertaining content while also creating awareness on safe sanitary practices.”

The association has been orchestrated by INS-BE Viacom18, the brand solutions division under media conglomerate Viacom18 Media Pvt. Ltd. The division in the past has successfully engaged with Arunachal Tourism, Himachal Tourism & Odisha Tourism along with prestigious associations with Ministry of External Affairs & DARPG under PMO.

Commissioned by the Ministry of Drinking Water & Sanitation in partnership with HDFC Limited, a leading financial conglomerate, ‘Hum Saaf Saaf Hain’ is being produced by Colosceum Media.  The lead actor of the show is the –humorous and witty – Rajesh Kumar, known for his popular stint as Rosesh Sarabhai. He will be seen playing the main character of ‘Hero Bhaiya’ who is a government clerk in his mid-thirties, finally getting a chance to fulfill his long-term dream of being a spy. The stellar cast also includes Gulki Joshi who will be seen playing the character of Archana- an ambitious school teacher and Shashi Rajan who will essay the role of Gobind among others.