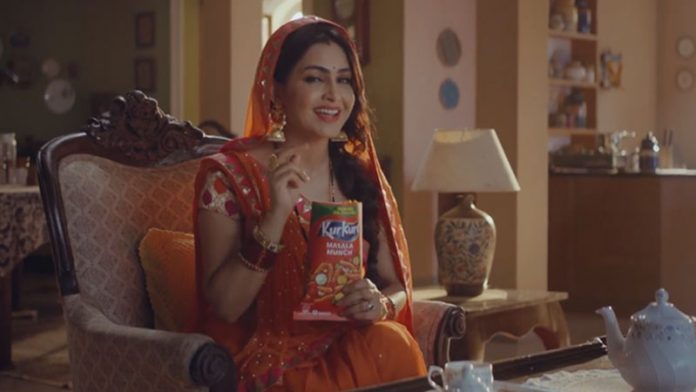 Kurkure will be seen as part of shows on channels from ZEE Entertainment Enterprises Limited (ZEEL) including ZEE TV, &TV, Sarthak and Big Ganga.

The protagonists of eight shows will be seen delivering a thought-provoking script; enabling their families to take a step towards embracing forward-thinking through fun and intelligent humor. The protagonists will bring alive Kurkure’s new positioning, “Khayaal Toh Chatpata Hai”, that celebrates progressive thinking that women bring into their traditional Indian households.

The integration will come alive on 13th May in Guddan – Tumse Na Ho Payega, wherein Guddan will be seen devising a plan to give her daughters-in-law a break from their routine by throwing a cooking challenge for their husbands, a chore they would be seen trying their hand at for the first-time in the show. These would lead to some challenging, yet funny scenarios at home, as the men take control of the kitchen and women take time off to relax and enjoy. Similarly, in the episodes of Bhabhi Ji Ghar Pe Hai, aired between 2nd May and 3rd May, Angoori was seen enrolling for a Sunday school; after a sequence of comical instances wherein she tried to convince Vibhuti and her husband, Manmohan Tewari.

Expressing his thoughts, Dilen Gandhi, Sr Director, Marketing – Foods category, PepsiCo India, says, “Kurkure is an ally to the Indian homemakers, who are the center force behind every positive transformation in the household. With the unique integration with ZEE TV plays, we hope to continue encouraging our consumers to take unconventional routes to help their families embrace progressive thinking, while at the back of being anchored to rich Indian values. Aided by a mood uplift through Kurkure’s crunch and chatpata taste, each of the protagonists will be seen delivering a thought provoking and entertaining storyline, and we hope that Indian homemakers enjoy this Chatpata twist.”

Ashish Sehgal, Chief Growth Officer, Zee Network commented on the association and said, “ZEEL shares great thought synergies with PepsiCo India, who has been a cherished client over the years. Our brand philosophies intersect beautifully when it comes to igniting a spark amongst the Indian masses to achieve the extraordinary. Through this collaboration we are happy to amplify this message Khayal to Chatpata hai across channels through the medium of our network influencers and ensure that it reaches the largest denominator in the form of engaging television content.”

Sharing thoughts on the in-show integration, Prathyusha Agarwal, ZEE CMO says, “Our protagonists, be it ZEE TV’s Guddan or &TV’s Angoori Bhabhi, are the Indian viewers’ most sought-after dinner table companions who they not only connect closely with but also draw inspiration from. While our flagship channel, ZEE TV with its brand ethos of Aaj Likhenge Kal, has stood for inspiring viewers to take charge of their destiny and work proactively in the present to build an extraordinary future. Our collaboration with Kurkure is a mark of our continued commitment to inspire our viewers every day to be their extraordinary selves. The protagonists, through evocative scripts will bring alive the synthesis of our brand philosophy with Kurkure’s new campaign ‘Khayaal Toh Chatpata Hai’. The collaboration will have our viewers look through the lens of celebrating Indian homemakers in a new light; a message relevant for viewers across gender, age and community.”

Commenting on the association, M K Machaiah, President, Content +, Mindshare South Asia said, “The team at Mindshare Content+ believes in weaving brand narratives around the Indian culture and keeping it relevant to the audiences in an environment they are attuned to. For Kurkure’s proposition of ‘Khayaal To Chatpata Hai’, we identified top serial plots that could bring alive the brand story in a context that’s relevant to Indian families. With 4 channels, several beloved faces of Indian television and multiple programming interventions, we are thrilled and confident of delivering the relevant impact for Kurkure.”

Capturing the essence of integration, Shubhangi Atre aka Angoori of Bhabhi Ghar Pe hai says, “It was a great experience to work on a script that promises to spark conversations within households. The in-show integration with Kurkure will definitely strike a chord with the viewers. It’s a strong message and holds the power to serve as a catalyst for transformation in thinking.”

Voicing the same thoughts, Kanika Mann aka Guddan – Tumse Na Ho Payega shares, “Guddan has always been a strong character voicing her progressive opinion. With the integration of ‘Khayaal Toh Chatpata Hai’, Guddan will be seen taking, yet another, step towards encouraging new thinking on every day matters at home.”

Recently, Kurkure launched its mascot, Ms. Kurkure, who will be a part of series of advertising and marketing campaigns driving relatability and building emotional connect with the masses, through her various quirky family stories.

BARC Week 19: Dangal, Sun TV, Star Plus top all channels list
ASCI upheld complaints against 248 ads out of 408
COVID-19: Nostalgia, re-runs, marathons - TV channels use every weapon in their arsenal

ASCI upheld complaints against 248 ads out of 408

Pepsico rolls out quirky campaign for Sting in India