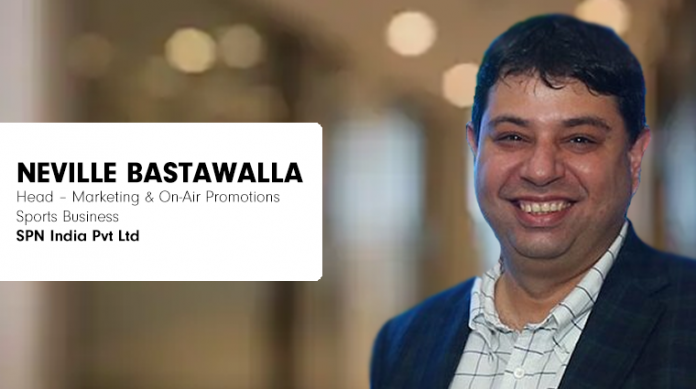 In conversation with Media Samosa, Sony Pictures Sports Networks’ Neville Bastawalla puts the spotlight on the rising popularity of non-cricket sports and the making of the ‘Love for Cricket’ campaign.

The campaign film captures this passion and features the story of a real cricket fan, Charles Rao, whose love for cricket transcends all boundaries as he follows his favorite cricketer, Shane Warne, despite being blind.

What is the rationale and insight behind the campaign – Love for cricket has no boundaries?

If you are a true cricket lover, you would watch good cricket irrespective of which teams or countries are playing. Being an ‘asli’ cricket fan results in you doing extraordinary things for the love of the game. This is what we picked up during our research projects across the country. We cracked the tagline in-house, that cricket has no boundaries, in the months of March and April and then waited for the right opportunity to launch the campaign.

This campaign was conceptualized with a clutter-breaking ad with the help of our supporting agency, Scarecrow M&C Saatchi. We have the largest cricketing series coming our way like the Big Bash League, New Zealand tour of Australia, England tour of South Africa, Australian tour of South Africa and West Indies tour of Sri Lanka among others. This was the perfect time to come out with this idea for this international series.

What was the key campaign objective?

There is so much cricket on television and the idea was to dominate the conversations on cricket that happen in this country. The entire country talks about cricket and Sony Pictures Sports Network wanted to be at the heart of it. In order to do that, we wanted to build an emotional connect with the people who are cricket fans and who really follow the sport. We didn’t want to make it depend on a certain event or any other series. We wanted to create something that is related to cricket but also transcends it.

How are you taking the campaign thought beyond the film? Also in how many phases will it be executed?

We will be expanding this thought on a larger scale through our multiple upcoming cricket series like the Big Bash League, New Zealand tour of Australia, England tour of South Africa, Australian tour of South Africa and West Indies tour of Sri Lanka among others. This is just the first of many creative we have made for this campaign. We will be exploring different routes in the coming months through this campaign. The latest addition to this storyline includes a TVC for New Zealand Tour of Australia which showcases how the love for cricket can surpass boundaries.

Sony has also time and again bet big on non-cricket sports. What has been the growth curve of non-cricketing sports been in India?

Sports in India have witnessed dramatic growth over the last few years and various sports are coming of age by getting the due respect that they deserve. Gone are the days when sports in India were equivalent to only cricket. Today, other sports like football, tennis, wrestling, and MMA among others are writing the country’s growth story. There is a huge audience for non-cricket sports and it is all about packaging and how you present it.

What are the newer initiatives on the block to leverage the popularity of other sports on the home ground?

Sony Pictures Sports Network is a global multi-sporting arena with the best of international sporting content. Apart from cricket, our portfolio includes WWE, UFC, Australian Open, UEFA Champions League, Serie A, Moto GP and NBA among other sports. We have around 200+ days of live cricketing action along with 700+ live football matches on our network throughout the year. The Australian cricket extravaganza – Big Bash League, along with South African Mzansi Super League is also aired on our network. For UEFA Champions League, we had #SonaManaHai campaign, which communicated to the viewers the importance of the tournament and how one can’t sleep when such high impact and quality football is on TV.

To promote UFC, which is quite a niche in India, we roped in Varun Dhawan and took him to watch an event in Abu Dhabi. He was also a part of a beautiful TVC to convey the fact that the action featured in UFC is as real as it gets. To add on to these campaigns, we also started the countdown for the much-awaited 2020 Tokyo Olympics with #HumHongeKamyab to motivate our Indian athletes in their preparation for Olympics 2020.

In your opinion, what are the other factors that are attracting brands towards non-cricket sports?

Brands want to associate with premium mass properties at an on-going basis. Sports events like the Australian Open, UEFA Champions League, Tokyo Olympics 2020 and EURO 2020 among others are very premium and have mass audiences watching these events. The brand association helps brands to enhance their premium imagery and also connect with the audiences watching these sports. The best combination for brands would be sporting events which are premium and mass in nature like FIFA World Cup which was broadcast on our network. Similarly, EURO 2020 (international men’s football championship of Europe organized by UEFA), Australian Open, Big Bash League and Tokyo Olympics 2020 among others are the mass premium upcoming properties on our network.

A new year and new season come with add-ons and innovations. The association of brands is not just restricted to TV campaigns. There is a growing focus on creating non-live content around sports as fans are immersed in facets beyond just the football match. Fan engagement activities like meet and greet, behind the scenes, contests etc. are important for the pre and post-show involvement. What new dimension is this adding up in the marketer’s landscape?

Non-live content is very crucial to keep the community of sports lovers engaged throughout the year. We would like to engage more deeply with passionate sports fans and therefore are embellishing our live content with a range of new shows and formats. Since its launch in 2017, we have received an excellent response for ‘WWE Sunday Dhamaal’, our weekly WWE show which features the best action and family-friendly entertainment from WWE’s flagship programs, RAW and SmackDown, every Sunday. The show is shot in our studio, hosted by Sahil Khattar and includes exclusive features giving Indian fans a unique, localized WWE experience once a week. The host is joined by various celebrities with latest being Arjun Kapoor and WWE Superstar Charlotte Flair.

In the digital day and age, what are the perceived benefits of associating with sports?

The sporting community is growing leaps and bound in India and any brand, through a well-thought strategy can get a loyal community to resonate with themselves. The premium association with premium sports helps in increasing the brand equity scores of a particular brand. Also, the reach objectives are met with larger premium sports watched by millions of viewers across the country.

The year 2020 will be a fully loaded year for Sony Pictures Sports Network. We have around 200+ days of live cricketing action including India tour of Australia. We also have 700 + live football matches from across the globe which includes UEFA Champions League, UEFA Nations League, Serie A and EURO 2020. Moreover, other exciting properties like Tokyo Olympics 2020, Australian Open, UFC, and WWE will also be aired on our network.