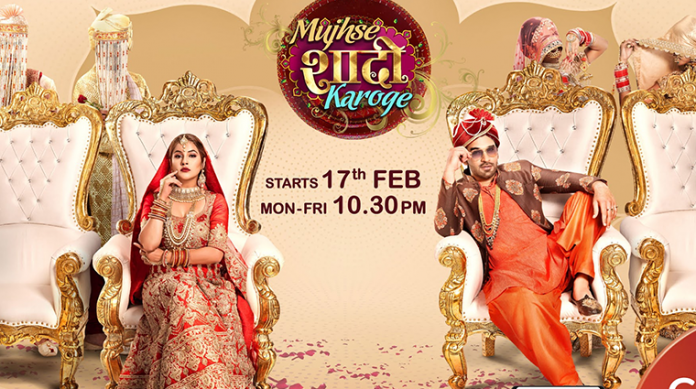 Endemol Shine will trace the journey of Shehnaz Gill and Paras Chhabra as they choose their life partners on Mujhse Shaadi Karoge.

COLORS brings to the small screen the journey of love, laughter and happily ever after with two former Bigg Boss contestants- Shehnaz Gill and Paras Chhabra. Endemol Shine India’s ‘Mujhse Shaadi Karoge’ will document the journey of 12 suitors (six men and six women), who will compete to win hearts of Shehnaz and Paras.

Speaking about the show, Nina Elavia Jaipuria, Head, Hindi Mass Entertainment and Kids TV Network, Viacom18, said, “Content that follows the real-life journey of television faces has always done exceptionally well, be it when they fight their biggest fear or live out of their comfort zone.  After a blockbuster season of Bigg Boss, with Mujhse Shaadi Karoge we bring back popular contestants – Shehnaz Gill and Paras Chhabra. As the two embark on their journey of finding their life partners, we hope the audience will shower them with the same love and support.”

‘Mujhse Shaadi Karoge’ will yet again lock Shehnaz and Paras in a house, this time for 13 weeks and with 12 suitors. Shehnaz and Paras as bride and groom respectively will choose their suitors from a pool of 6 each and helping them in screening the top 6 matches would be their close friends and Bigg Boss co-contestants- Siddharth Shukla and Rashmi Desai. Initially, a few episodes of the show will also be hosted by Maniesh Paul. All 12 contestants will go through several rounds and their performance will decide their fate on the show and in Paras and Shehnaz’s life.  While the final power of choosing their life partner will be in the hands of the two, the audience will also play an integral part in this journey. Along with this, the viewers will also get a chance to follow them through the process of a complete makeover.

Manisha Sharma, Chief Content Officer, Hindi Mass Entertainment at Viacom18, said, “Choosing a life partner is one of the hardest decisions one has to make. What can make it a lot more challenging is when you have millions watching you make this choice. Riding on the soaring success of the latest season of Bigg Boss, Shehnaz and Paras, on public demand, have agreed to be a part of yet another roller coaster ride. Mujhse Shaadi Karoge is a unique concept that will trace an emotional yet interesting journey of Shehnaz and Paras choosing their partner, at the same time will give 12 extremely entertaining suitors a chance to prove their love. Paras and Shehanz’s quirks, their outgoing personalities and their popularity from Bigg Boss will definitely add to this experience.”

On being a part of the show, Shehnaz Gill, said, “It is rightly said that when one door closes another opens. It is perfect timing to start a new chapter in my life, as my journey on Bigg Boss comes to an end. While I am excited to see what the future holds but I am nervous to make a life-changing decision on such a popular platform. I am glad that my close friends from the Bigg Boss journey will also be a part of this and someone I closely know will live with me through the same experience.I hope the audience will shower me with immense love and support.”

Adding further, Paras Chhabra said, “It’s an exciting journey that I am about to embark on and I am thankful to COLORS for giving me this opportunity. I am definitely nervous, but I can’t wait to start this adventure and find someone who matches my vibe. For me, the qualities I am looking for is -fun, outgoing, supportive and loving. I hope that viewers will give me the same love and support that they have given me through this season of Bigg Boss.”