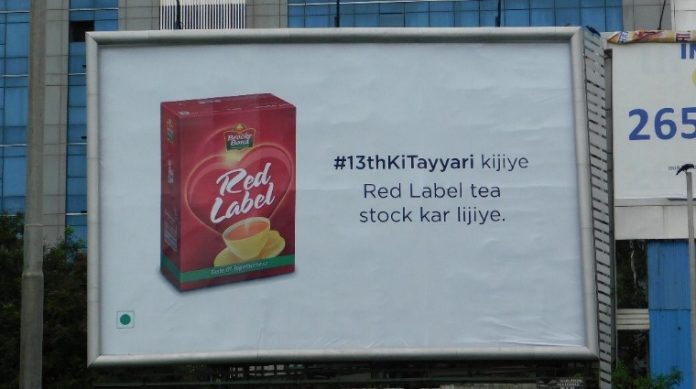 Several brands were seen being featured on hoardings with the same layout under #13thKiTayyari, making the beginning of a Zee TV campaign.

A few days before July 13 when Zee TV and other channels were to start airing new episodes of their shows after a hiatus of about three months, a campaign was started to share the news. Under #13thKiTayyari, hoardings were put up in Delhi and Mumbai, featuring several FMCG brands such as Amul, Red Label, Pepsi, Maggi, Cadbury and Sunfeast. Though not many could see these hoarding advertising in real life, enough buzz was created online around the hashtag. Several memes also came up.

These hoardings worked as a teaser for a Zee TV campaign #BanegiBaatSaathSaath. The hashtag was later tweaked to #13thKiTayyariZeeTVKeSaath after the reveal on social media. Zee TV thanked the FMCG brands that were featured on these hoardings.

The trend was also leveraged by other channels such as Colors and SAB TV to announce that they would be broadcasting new episodes from 13th July.

Given the lockdown condition and restrictions, using hoardings to generate buzz around the campaign was an intriguing choice. Zee TV was able to achieve its goal and that too in a way that was arguably creative and well-planned.

Imperial Blue rolls out new TVC under ‘Men will be Men’...